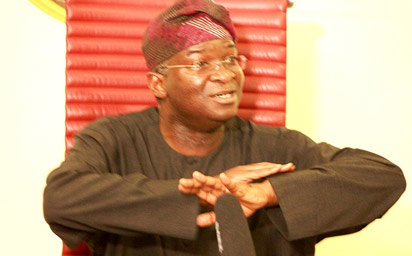 Outgoing Governor of Lagos State, Mr. Babatunde Fashola (SAN), has said that his administration has done a lot to improve the living condition of the citizenry.

Speaking at an interactive session with State House correspondents at his Marina residence on Friday night, Fashola said that his administration had added value to governance.

Describing attacks on his administration by the opposition as “unfair”, Fashola maintained that he had done so much to improve the living standard of the people since he assumed office in 2007.

According to him, all the sectors of the state’s economy, including housing, education and revenue generation, have witnessed significant improvement under his watch as governor.

“Let me say that in every election, the records of the government in power must be an issue, and I am happy that at least our record is the issue.

“But our record as a state government is a record of performance and promises kept and development fulfilled.

“If you look at my record, whether as Chief of Staff, go to the Chief of Staff office, I added value when I took over from Alhaji Lai Mohammed.

“That is what leaders do, they add value to what they met”, he said.

Fashola also said that he had added value to governance when he took over from his predecessor, Bola Tinubu.

“I employed more people into the civil service and increased salaries, I paid pensions and everywhere you go, you will see the touch of our government and party”.

He, however, said governance is a continuous process, stressing that, “it is not a finished job and I will never pretend to anybody that the job has finished”.

Fashola described the governorship candidate of the All Progressives Congress, Mr Akinwunmi Ambode, as an experienced technocrat capable of moving the state forward.

Responding to a query on why the state retained the death penalty in its criminal law, Fashola said it was based on a survey, which showed that residents favoured the death sentence for armed robbers and murderers.

The governor further restated his commitment towards the development of the state.