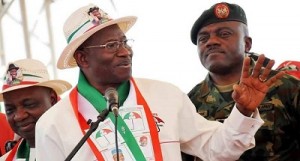 Suleiman said this at a reception organised in his honour and other past deans, by the Faculty of Social Sciences, University of Abuja mini campus, Gwagwalada.

According to him, the appointment of an activist in the person of Prof. Attahiru Jega as chairman of the Independent National Electoral Commission (INEC) by President Jonathan was a demonstration of the large heart of his leadership.

“One thing we should all know is that Jonathan does not have the plan to rig himself back. If he had or has that plan, he would not have appointed Jega, an activist, as the INEC chairman. Even on my appointment, Mr. President demonstrated a large heart.

“This administration is working and the evidence is there. I will continue to do more for the university and I can do better, and if you truly like me, vote to return Goodluck Jonathan.

“I was an active unionist during my days as a university lecturer. I led a protest against the then vice chancellor, which we carried up to the government level, yet Mr. President decided, devoid of any sentiment, to appoint me a minister. It takes one with a large heart to do that,” Suleiman said.

In his remarks, the Vice Chancellor of the university, Prof. Mike Adikwu, commended the minister for always putting the university first.