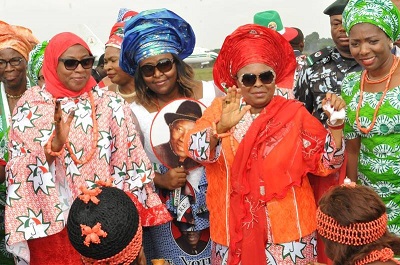 Wife of the President, Dame Patience Jonathan, on Wednesday said because of the trust her husband, President Goodluck Jonathan has in women, he put the fate of Nigeria’s economy in their hands.

According to her, the ruling PDP is the only party that remembers women as it has given them key portfolios in the Federal Executive Council.

She also claimed that the opposition APC wished the country’s women no good.

“Nigeria women, are you there? Are you there? This is my constituency. PDP is the answer. PDP is the only party that has given women 35 percent (affirmative action)…So, this is the time for us to pay back to PDP and Goodluck Jonathan’s administration.