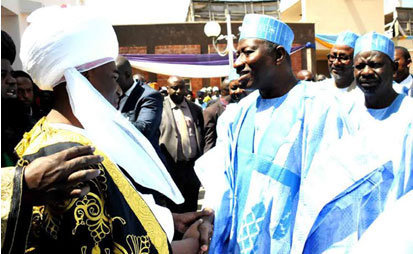 A prominent Ijaw leader and traditional ruler, Chief Asara A. Asara, has described the bombing incidence after President Goodluck Jonathan’s campaign rally in Gombe State on Monday as politically motivated and aimed at frightening him out of the presidential race.

The traditional ruler of Aki IX, Obanema of Akipelai, in Bayelsa State, in a statement issued on Wednesday, said it was wrong to believe that suicide bombers were behind the bombing, saying the target of the bomber was the president as an attempt to eliminate him.

It would be recalled that a female suicide bomber blew herself up in Gombe minutes after the president left a campaign rally there.

The Gombe police command spokesman, Fwaje Atajiri, had denied speculations that the attack was targeted at the president, saying the bombing occurred around the Water Board area of the town, far away from where Mr. Jonathan held his rally at the Fantami Township Stadium.

“The president was long gone before the blast and if not for media, he would not (have known of the blast) so he could not have been the target. The suicide bomber was heading to her target when the bomb she was carrying went off in an empty place prematurely because of the high level of security put in place”, he said.

But Chief Asara insisted President Jonathan was the target. “It is very clear and no one should say otherwise that the person of Mr. President and other people in his convoy were the target”, he said. “That is, the objective of the bombers (they are telling us they were suicide bombers) was to eliminate the president”.

“We may also adduce that the Gombe bombers did what they did as part of the now orchestrated campaign to intimidate or scare the president away from the contest which, it has become obvious he is bound to emerge victorious”, he added.

The traditional ruler noted that the bombing was more dangerous to the incidences that occurred “in Kastina, Bauchi, Kano, Kaduna and Jalingo among others, where President Jonathan’s campaign train was pelted with hales of sachet water and other dangerous missiles”.