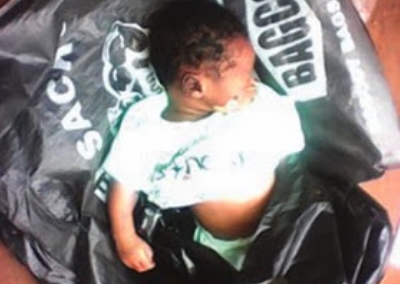 A new born baby, wrapped in a black sack and covered with a plaster on the mouth, died after being abandoned by the roadside in the Abule Egba area of Lagos by his mother, who’s suspected to be mentally unstable.

According to Punch, the baby was dumped in the area on Wednesday, January 28 and when people in the area saw the baby instead of helping the baby, they left him there for six hours until the baby died. Continue for the story
From Punch

Speaking with Punch, a trader, Mrs. Atanda Kuforiji, said they were taken aback by the sight of the abandoned baby. She added that a resident of the area drew the attention of other residents to the presence of the baby dumped by the roadside.
She explained that everybody went to the scene to see why the resident was shouting, only to be confronted by the sight of the new baby.
She said, “The baby was wrapped in a sack and placed by the roadside. I saw a crowd gather and decided to have a look; the child was still alive.
“People took pictures of the baby. His mouth was covered with a plaster to prevent him crying out. Everybody was saying what came into their heads, but nobody offered to help the baby.”
It was learnt that many of the dwellers in the area were too scared to pick the baby from where he was dumped.
A driver, Mr. Lasisi Gafar, said since the incident, nobody had seen the unstable woman in the area.
He said, “There used to be a female lunatic around the street who was pregnant, but since the child had been dumped I have not seen any trace of her. We suspect that she was the one that dumped the baby here, but nobody could find her to question her.”
It was gathered that the baby later died after struggling to live for over six hours.
A trader, who identified herself simply as Iya Monsura, said, “The child was alive as of 11am, but when government officials came around 5pm, he was dead. They took the dead body away.”
It was learnt that no efforts was made to report the case of dumped baby to the police. Some of the residents said such attempt could put them in trouble as the police might treat them as suspects.