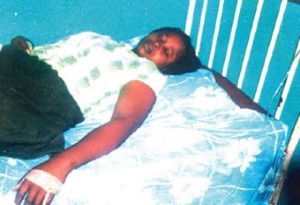 The Lebanese couple tried settling Nigerian worker with N400K after torturing her.

The Lebanese business owners, Joseph and Hala Yazbeck, who severely tortured a Nigerian woman working for them, Grace Okpara, are making moves to settle the matter amicably by offering her the sum of N400,000 so as to settle the case away from the police.

The celebrated case made the headlines few days ago when it was reported that woman who was a cleaner at Buildwell Plant and Equipment Industry Limit­ed, a logistics company located along the Lagos/Ibadan Expressway, where the couple are said to be directors, was brutalized by the Lebanese wife and her husband and in the process, Okpara sustained serious injuries and had to be hospitalized.

She also reported the case to the Ibafo Police Station in Ogun State, but the Yazbecks do not want the case to go beyond the police and are prepared to settle her.

Reports have it that the Delta State born woman was made the offer during a peace meeting called by the Divisional Police Officer of the station in a bid to settle the issue.

But Okpara is said to have refused collecting the money, choos­ing instead to have the matter charged to court as soon as the striking judi­ciary workers resumed duties. She says she wants to use her case to serve as deterrent to other foreigners who maltreat Nigerian staffs, treating them as lesser people.

Okpara narrates that prior to the torture incident, the woman, Hala, had been a thorn in her flesh right from when she began working with the company four years ago. She said that torturing workers was a common occurrence in the company.

According to her, Lebanese employers often brag about how they have bought the Nigerian system, claiming that even if they kill a Nigerian working in their companies, the government would not do anything against them.