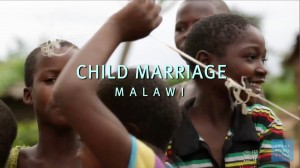 Malawi has passed a bill into law banning child marriage, and as a result raising the minimum age a child could marry to 18 in a country where half of girls end up as child brides. Reuters report:

Women rights campaigners hailed the move as “a great day for Malawian girls” and said the law would help boost development in one of the world’s poorest countries. But they warned Malawi would not end child marriage without concerted efforts to tackle poverty and end harmful traditional practices like early sexual initiations.

“This law is extremely crucial because child marriage is a big, big problem in our country,” said parliamentarian Jessie Kabwila who helped push for the new legislation. “The country will for the first time clearly articulate that we are saying ‘No’ to child marriage.”

Malawi has one of the world’s highest rates of child marriage. Half of girls wed before their 18th birthday and nearly one in eight is married by 15. Early marriage not only deprives girls of education and opportunities, but also increases the risk of death or serious childbirth injuries if they have babies before their bodies are ready. Child brides are also at greater risk of domestic and sexual violence.