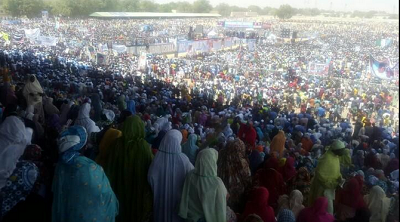 A mammoth crowd of supporters on Monday in Maiduguri overwhelmed the All Progressives Congress (APC) presidential candidate, Gen. Muhammadu Buhari, making him to abandon several efforts to address them.

It took the convoy of the candidate more than an hour from the Maiduguri International Airport to arrive the Ramat Square, venue of the rally.

The APC candidate, who was accompanied by his running mate, Prof. Yemi Osinbajo and other party leaders, had to abort all efforts at addressing the crowd which kept shouting “Sai Buhari”.

Thousands of party supporters, mostly youths, had lined up along major roads in Maiduguri as early as 7a.m. to catch a glimpse of the APC presidential candidate.

Vehicles were forced to move at snails speed after Buhari arrived the state capital, as supporters occupied the roads in celebration.

NAN further reports that the APC presidential candidate also had to cancel the inauguration of some projects executed by the state government due to the mammoth crowd which inhibited movement. (NAN)