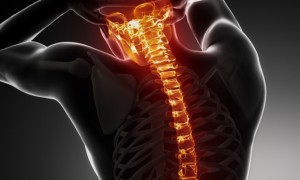 A young man, simply identified as Akeem Amoo has broken his spinal cord after he engaged in a fight over a woman with one Michael Taiwo. PM News reports:

The incident happened at about 7.40 p.m. recently at Omisesan junction, Alagbado area of Lagos State, western Nigeria, where the two men reside. The 28-year-old Taiwo reportedly lifted Amoo up and hit him on the ground where stones were and he broke one of his legs and spinal cord.

He cannot walk again as doctors certified him unfit after the fight. He is now confined to a bed in an undisclosed hospital in Lagos. P.M.NEWS learnt that Amoo and Taiwo had a disagreement over a woman which resulted in both of them fighting in public.

Following the development, the police arrested Taiwo for allegedly inflicting grievous injury on Amoo. He was charged to Ojokoro Magistrates’ court where he pleaded not guilty and was granted bail by the presiding Magistrate, Mrs T. Akanni. However, he was remanded in prison custody pending when he will perfect his bail conditions.