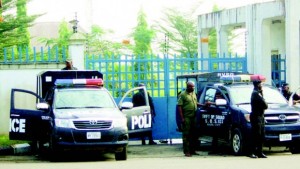 One Mr. Alex has been arrested for attempting to rape his own 15-year-old daughter in his apartment at Abiodun street, Ajegunle, Ajeromi, Ifelodun local government area of Lagos, though claiming he was only trying to find out if she was still a virgin. Ynaija has more:

He claims he carried out that act to test her virginity. Leadership newspaper reports that Alex was apprehended by his neighbours and handed over to the police at Ajegunle police station but was later released on bail last weekend.

A police inspector attached to Ajegunle police station disclosed that it was neighbours that dragged the suspect to the station. He said: “His wife was not at home when he wanted to perpetrate the act but the man denied doing that. “You know that nobody will agree that he wanted to rape his daughter. Police acted on the information given to us and even took the minor to the general hospital for medical examination.”