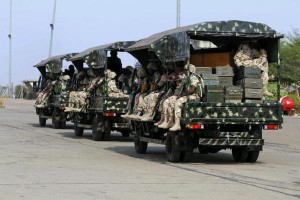 Niger’s air force successfully bombed a convoy of trucks which were carrying smoked fish to Nigeria, a trade banned by local officials because it is suspected of helping to finance the Islamist militant group Boko Haram, security told Reuters on Wednesday.

“Earlier this week, air forces fired on merchandise vans along the river Kamadougou,” said one of the sources. The river separates northern Nigeria from southeastern Niger. The people in the trucks fled over the border into Nigeria, the source said.

Niger officials say Boko Haram taxes fishermen or seizes their catches along the shores of Lake Chad and uses the money to help fund their bid to carve out a caliphate in northeast Nigeria. The insurgency, which has killed thousands, was partly responsible for delaying Nigeria’s election earlier this month.

A second security source confirmed the incident and said about a dozen people suspected of involvement in trading fish for Boko Haram were arrested earlier this week.

The air strikes came as the governor of Niger’s Diffa region, which borders Boko Haram strongholds in Nigeria and has seen a spate of attacks by the militants this month, officially banned the sale and transport of fish into Nigeria this week.