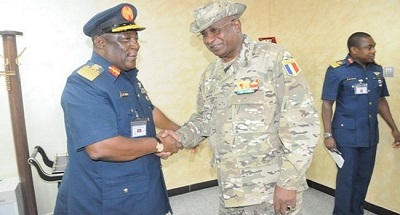 Nigeria’s Chief of Defence Staff, Air Chief Marshal Alex Badeh and his Republic of Chad counterpart, Major General Ibrahim Mahamat, Friday met in Abuja to fine-tune strategies on how to stamp out Boko Haram from both countries.

The Defence Chiefs signed an addendum to an existing Memorandum of Understanding (MOU) to wipe out Boko Haram after 8 hours of closed door meeting, which had in attendance Nigeria’s Service Chiefs, the Ambassador of Chad to Nigeria and other military top brass from Chad.

Badeh said: “As I said earlier in the morning, what we have is just an addition to the MOU we signed in Chad on the 18th of January, 2015”.

He explained that: “we are aware you are already working around Fotokol and Gamboru Ngala while we are working from the southern part so that we can meet somewhere in the middle and finish this thing once and for all”.

Fielding questions from journalists, CDS Badeh said Chadian forces are on Nigerian territory mostly at the border now of Fotokol and Gamboru Ngala, on the basis of the bilateral agreement signed with them.

“We have been working together since, and they came in now to clear some grey areas, that is what we have done and we have just made an addendum to the MOU that we signed on the 18th of January”.

He noted further that Chad is bringing a force of about 2500 soldiers and Nigeria is deploying about 5000 troops to work specifically with the Chadian Forces.

Speaking earlier before the meeting, the Chadian Chief of Defence Staff, Mahamat said: “Our visit here is to discuss with our Nigerian colleagues, to discuss the issue of boko haram and how we will coordinate and probably eradicate it”.

Badeh had also commented that they have had several meetings under the auspices of the Lake Chad Basin Commission. “And you are aware that because of the failure of the multi-lateral or the inadequacies of the multi-lateral agreement, we have had on the 18 January, myself and the Chief of Army Staff flew to Ndjamena and held talks with you”, he added.