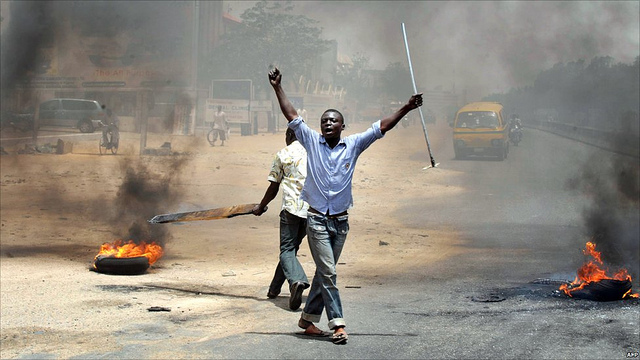 The anxiety over the outbreak of violence during or after the forthcoming general elections which was slated for February 14th and 28th but now postponed to March 28th and April 11th respectively has generated uneasy restiveness and high alert for predictable breakdown of law and order depending on the outcome of announced results.

Palpable fear nursed by predominantly apprehensive Nigerians who are not resident in their respective states of origin has become more amplified. In the backdrop of recounting the terrible loss of human lives and properties after the results of previous elections announced, most families who feel threatened in their places of resident have decided to take precautionary measures by fleeing away from such violent prone zones mostly in the volatile parts of Northern Nigeria.

This worrisome development paints a gloomy picture of the deteriorating faith of the people in the “Nigerian Project” considering the fact that their fears are not allayed by government assurances of providing security to all people.

A good number of families have decided to relocate their loved ones either temporarily or permanently to avoid been trapped in any impending skirmish pregnant in the highly tensed and overheated polity.

This electioneering year presents another huge challenge to Nigeria given the fact that the whole world’s attention is now focused on us as been the pride of black Africa to set an exemplary record in ensuring the conduct of free and fair elections despite the enormous security defies threatening our corporate existence as a nation.

The fragility of our unity is also put to test in the eye of visible mistrust and prejudice dwelling amongst us. These insalubrious emotions have a tendency to spark violence on issues that warrant understanding and co-operation to achieve progress and enviable positions in the comity of nations, an ugly trend that portends grave consequences to our socio-economic well-being. It also does not augur well for a nation desiring to deepen her democratic institutions for effective delivery to our people the dividends of democracy.

It is germane to note that aside the issue of insecurity that poses a threat to the peaceful conduct of elections, another reason warranting the shift of dates earlier designated for the polls is the poor collection or distribution of permanent voter’s card (PVC) to eligible voters. For the sake of some Nigerians who are yet to collect their PVC and their possible disenfranchisement, some certain group of people had started protesting and clamouring for the extension of election dates.

The chairman of Independent National Electoral Commission (INEC) Prof. Attahiru Jega, was forced to bow to the demands of an earlier call made by the National Security Adviser Col. Sambo Dasuki on the need to extend the elections in view of the prevailing insecurity there’s no guarantee for safety if it’s conducted within the stipulated period.

A look at the demographic composition of Nigeria across the different states of the federation, one would have to admit that a considerable number of people will still not avail themselves to collect their permanent voter’s card and certainly their votes will not count in the forthcoming general elections. My reasons stems from the fact that a good number of people have been maimed and displaced from their places of residence for which some fleeing survivors are camped in neighbouring countries of chad and Niger due to the insurgency ravaging the north east of Nigeria.

Another reason that will contribute to the low turnout of voters aside fear of possible attacks that will be targeted at voters by the dreaded terroristic group is the issue of mass exodus of families fleeing away from states or places they consider a flash point of post-election violence.

For these large number of fleeing Nigerians” who registered in such places their anxiety has forced them to leave, there is no way their votes will count since they will not be allowed to use their voters card elsewhere other than the polling units where they were registered. To this end there will still be low participation of people in the electoral process most especially in areas where such “fleeing residents” dominate.

A particularly ugly incident occurred that spurred me into writing this piece. It is so unfortunate that in the course of trying to escape an imminent threat to extermination during or after the elections, a Nigerian family of six was exterminated prematurely in a ghastly car accident along a section of our highly deplorable road in the northeast region of Nigeria. This particular family (name withheld) had successfully executed their plans of relocating in good time before the now postponed elections are held. Exactly a week to the earlier scheduled February 14th polls, the unlucky family met her cruel end.

To me it is a sad tale but with lessons to learn. The tragedy that befell the family could have been avoided if only they had faith in the government of this country’s readiness and absolute resolve to ensure the safety of all Nigerians regardless of their places of domicile. Yes the government has failed Nigerians like the unfortunate family that knew their safety could not be guaranteed by today’s present regime. The government has failed in giving assurance to the people on the security modalities put in place to avoid such panic. If the government had demonstrated sincerity of purpose in preventing, apprehending and prosecuting miscreants involved in electoral violence, plenty unexpected deaths would have been prevented.

As much as I know that the responsibility of providing security for all does not rest solely on the part of government, our leaders have over the years exhibited culpability in dealing with the situation by sometimes shielding perpetuators of such heinous crimes from the full wrath of the law.

The general perception of most Nigerians about our government can be paraphrased as thus “all man is on his own”. People evidently no longer have faith in our leaders because they have on several occasions exhibited insensitivity in the callous wastage of innocent lives by enemies of our statehood. Until our government holds high reverence for the sanctity of the lives of her citizens by ensuring adequate security for all is provided, we will still find ourselves mourning the tragedies resulting from ineffective and indecisive leadership actions that do not place value on the lives of Nigerians by ensuring our safety irrespective of religious, ethnic and political differences. Every Nigerian has the right of choice to determine where he/she decides to live and work without fear of harassment and possible annihilation.

In conclusion it is our collective duty as a people to enlighten amongst us the ignorant and gullible ones who usually avail themselves to be used by desperate politicians to wreak havoc on unsuspecting and innocent citizens. This keenly contested election will come and go” but our dreams for a greater nation should remain and never be diminished in the event of the final result outcome at the polls that may favour our interests or not. Our hopes should be kept alive for the emergence of credible leaders through the will of the people. We need leaders who are passionate and sincere about their desire to render their selfless service towards the advancement of our nation in line with best democratic principles.

We must not forget also that no human development and economic progress can be achieved in the absence of peace and unity. Let’s all conduct ourselves peacefully during and after the conduct of the elections to ensure a peaceful transition of power. For my fellow compatriots let’s remember no force or intimidation can stop the wind of change blowing towards our nation, because the time has come.