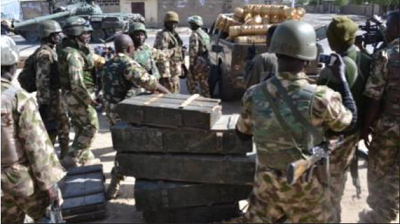 Governor Kashim Shettima of Borno State on Monday stated that ninety per cent of the ongoing battle to reclaim seized territories under the control of Boko Haram is being carried out by the Nigerian Armed Forces and not by troops of neighbouring countries as “wrongly” perceived by the media.

Shettima insisted that soldiers of Chad, Cameroon and Niger Republics cannot claim undue credits for the current successes being recorded over Boko Haram because the Nigerian troops are playing larger role in the battlefront.

“We appreciate their efforts and support for the government of Nigeria, but it should be known that the bulk of the job of cleansing our society of these Boko Haram lunatics is being done by officers and men of the Nigerian armed forces who are ably supported by the Nigeria Air force”, Shettima said.

“I don’t want to dwell so much on the inner workings of the ongoing counter insurgency operations which I have access to; but by and large we appreciate the efforts of the Chadian, of the Cameroonian and Nigerien troops; but I can say that 90 percent of the job is being done by our people – our own soldiers”.

The governor, who made this remark when the new Commander of the 79 Composite Group, Nigeria Air Force, Maiduguri, Air Comodore Christopher Eyi Egbuoba, paid him a courtesy visit at Government House Maiduguri, noted that all what the troops of the three neighbouring African countries had been able to do was not more than 10 per cent of the job needed to be done.

“Some of them especially the Cameroonian had assisted us by sealing off the borders”, he said.