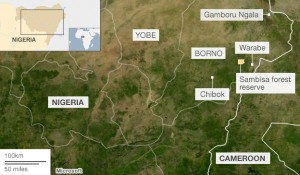 Nigeria’s military on Tuesday said the country’s sovereignty was not compromised despite the presence of Chadian ground troops in the northeast to fight Boko Haram.

Chadian soldiers had last week carried out air and ground assault against insurgents at the Borno town of Malam Fatori. The Defence headquarters had defended the attack, saying the town was under the area covered by the recently constituted Multinational Joint Task Force, which Chadian troops were part of. However, the troops again crossed the border from northern Cameroon to the Nigerian town of Gamboru on Tuesday after three days of bombardment of Boko Haram positions, as the regional fight-back against the Islamists continue.

They were also deployed near two villages on the Niger side of the border and appeared poised to cross into Nigeria to take the town of Malam Fatori, according to local residents.

RE: #Malamfatori is within the Area of Operation covered by the Multinational Joint Task Force of which #Chad has always been a part. /1

“Contrary to the impression being pushed in some quarters, it is the Nigerian forces that planned and are driving the present onslaught against terrorists from all fronts in Nigeria, not the Chadian forces, as is being propagated by some media,” he said, adding that there were contingents from Nigeria, Niger, Cameroon and Chad in the operations, which allowed “a massive move against terrorists from all angles”.

“Chadians and other are however keying into and working in concert with the overall plan for an all-round move against the terrorists, as agreed,” he said.

While the military has allayed fears that the nation’s territorial integrity might have been compromised, Mark Schroeder, from security and political analysts, Stratfor, told AFP this week that allowing foreign forces to operate on Nigerian soil would be counter-productive.

“This is essentially absolving Nigeria of its long-standing geopolitical strength as the region’s hegemon able to assist internal and pan-West African security stability,” he said.