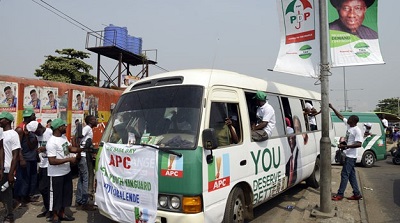 The Nigerian Army on Monday warned politicians and political parties in Borno State against parking their campaign vehicles outside their party offices.

In a statement by the 7 Division of the Nigerian Army in Maiduguri, the Borno State capital, politicians were warned that any such vehicles seen parked outside the designated places, would be treated as constituting security risks.

The statement, which was issued by the spokesman for the Division, Col. Tukur Gusau, read: “The headquarters 7 Division of the Nigerian Army wishes to appeal to politicians in the state to please park their marked campaign vehicles in their respective political party offices only.

“Any vehicle seen, parked outside such offices, will be treated as security risk”.