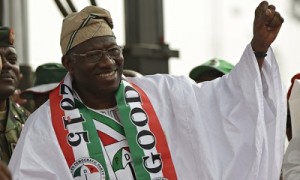 Lagos State governorship candidate of the Peoples Democratic Party (PDP), Jimi Agbaje says President Goodluck Jonathan is a transparent man, who has been fighting corruption since the beginning of his administration, contrary to the propaganda of the opposition.

Agbaje said this, weekend, at the launch of a book titled Showcasing Goodluck Ebele Jonathan’s Monumental Stride: A Third Party Perspective, written by Citizens Network for Peace and Development.

“They said Jonathan is corrupt. Have they ever fought anybody for corruption in Lagos since 1999 to date? With all the allegations of embezzlement in Lagos they have not probed anyone in Lagos and they want to fight corruption in Abuja when they hope to get there?,” Agbaje queried.

“Transparency International did a report recently and said the administration of President Jonathan has fought corruption the most. Don’t let them shut us down or be afraid to speak the truth. There is no programme that the APC presidential candidate, Gen. Buhari, has that Jonathan cannot double.

“It is very funny when they use all forms of propaganda to win election by all means,” the governorship hopeful said.