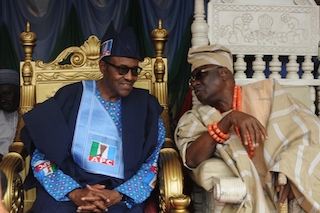 The Oba of Lagos, Rilwan Akiolu II, has warned the recently deployed Assistant Inspector of Police (AIG) in charge of Zone 2 Police Headquarters, Lagos, Mr Joseph Mbu, to desist from any attempt to intimidate the people of Lagos as he earlier did in Rivers State, when he was police commissioner.

The traditional ruler, who called on people of Lagos to cooperate with security agencies, sounded a note of warning to Mbu, saying:  “Nobody can intimidate us. Let it be clear that Lagos is not Port Harcourt.

“Though police redeployment is normal during elections, but any policeman that comes here to cause trouble will fail. I and my people will give him a matching order”.

The traditional ruler advised police officers not to be partisan, adding that “police should do their constitutional role without bias.

“I want to sound a word of warning to security agencies. If anybody comes here to come and cause trouble he will fail. Others have tried and failed. Sometimes back, someone (a police officer) was posted here and he attacked me and Asiwaju Bola Ahmed Tinubu. I told him (police officer) he will fail and he did fail”, the Oba added.

He, however, urged the people of Lagos to cooperate with the security agencies for the general well-being of the state.

“I urged my people to cooperate with the police and the army to do their job. I want all my people to be peaceful and law-abiding. All shall be well with us”, he said.

Oba Akiolu pointed out that Lagos State has suffered under the PDP-led Federal Government since the return of civil rule in 1999 and described Buhari as an upright, honest and dedicated gentleman, who meant well for the country.

“Lagos won’t ever lag behind again in the forthcoming dispensation. I know the ability of Buhari. He is very passionate about this country and he will deliver”, he added.