A youth organisation under the aegis of Coalition Northern Nigeria Muslim Youths (CONNMY) have threatened to “extinguish” the presence of Daar Communications (franchise owner of African Independent Television [AIT] network, Raypower FM network and Daarsat) from northern Nigeria if General Muhammadu Buhari of the All Progressives Congress (APC) fails to triumph at the forthcoming Saturday, March 28, 2015.
The group issued the threat via a letter dated Tuesday, February 10. 2015 and signed by one Abdulkadir Idris, the spokesman for CONNMY.

Citing perceived hate messages broadcast by the station(s), the group warned that it “will not sit wand watch AIT destroy the image that General Buhari has spent the last 50 years building with integrity and honour,” threatening that nothing can save the media house from the “violent and drastic extinction” coming its way.

See the letter below: 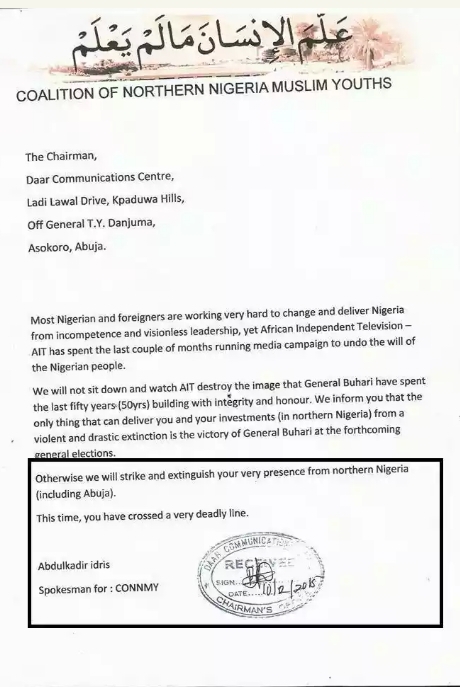