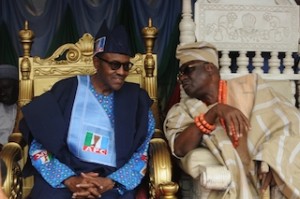 Oba of Lagos, Rilwan Akiolu, yesterday, slammed former President Olusegun Obasanjo, accusing him of creating all the injustices he now accuses the present administration of.

“God gives many people long lives so that they can get enough punishment, like what is happening now. All the injustices they did against Lagos State from 1999 to 2007, God is exposing them. All the accusations the former President, Obasanjo is giving now, he initiated and nurtured it. He masterminded it and now he is complaining. God has a way of doing things. More are still coming to him,” the monarch, who was one of the special guests at the commissioning of four Nigerian Navy Ships by President Goodluck Johnathan, told journalists.

“Who gave you that rumour? Who said so? Some of the things they are writing, for instance, like that former Minister Obanikoro, I went to his aged mother that they should warn him seriously. For the Presidency, I support the best person.

“If I want to do something, I do not pretend, God almighty Allah will give the Presidency to the people Nigerians want to do the best for this country,” he stated.

“I have picked Akinwunmi Ambode as the next governor of Lagos State. I have my reason for saying it and I do not hide it. I acted on God’s wisdom and picked him and by the grace of God, he will be the governor of this state.”

The Oba also commented on the postponement of the election date by the Independent Electoral Commission, (INEC). “The Head of State and INEC have told us that the elections will take place March 28 and April 11 and I hope by the grace of God, it will be like that. For the time being, the intent and purposes for the postponement is acceptable.”