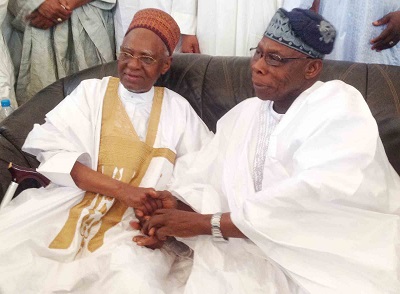 Former President Olusegun Obasanjo has denied reports in a section of the media that he deliberately arrived late at the birthday celebration of former President Shehu Shagari, after all the other past leaders and President Goodluck Jonathan, had departed the Sokoto home of the celebrant.

President Shagari’s 90th birthday was marked with an unusual fanfare Wednesday with President Jonathan and all former Nigerian leaders, except Gen. Muhammadu Buhari (retd.), in attendance.

Obasanjo arrived only after his colleagues had left after the cutting of the birthday cake, fuelling media speculation he deliberately refused to arrive early to avoid a meeting with Mr. Jonathan, whom he has in recent times criticized harshly.

But the former president denied snubbing President Jonathan and other past leaders, saying he had no cause to backtrack on what they all agreed to do together in Mr. Shagari’s honour.

Mr. Obasanjo said it was “unfortunate” he arrived President Shagari’s Sokoto home late, and blamed a traffic gridlock in Lagos for the delay.

“I have read with dismay the imputation of some section of the media to the unfortunate incident of my not being able to be with my colleagues at the birthday celebration of President Shehu Shagari on Monday 25 February”, Mr. Obasanjo said in a statement Friday.

The ex-president accused the media of failing to report his apologies to Mr. Shagari during the visit.

“I had no cause to dodge, avoid or snub my colleagues for what we all agreed to do together”, he said.