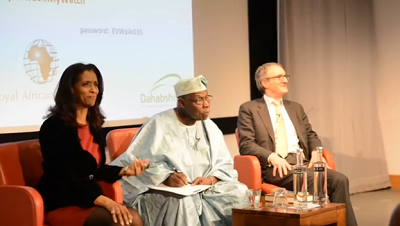 Obasanjo spoke to journalists at his Presidential Hilltop Estate, Abeokuta mansion in Ogun State. He opined on the state of the nation and gave his opinion on the elections postponement.

He drew parallels between President Jonathan and the former Ivory Coast (Côte d’Ivoire) leader Laurent Gbagbo. Gbagbo, Obasanjo said, kept shifting the election date in his country until he was sure of winning. When the elections came resulted in a run-off, not only did he refuse to hand power over upon losing, but also “unleashed chaos, confusion and crisis” on his people “until nemesis caught up with him.”

Obasanjo maintained President Jonathan should be careful of those prodding him on, because “when the heat begins, he [Jonathan] would be left naked and isolated.”

Obasanjo insisted that the elections dates shift was informed by Jonathan’s fear of Buhari because of the latter’s tough disposition towards corruption and other vices.

The former president prompted Nigerian politicians to do everything possible to ensure peace and tranquility within the period.

Obasanjo also warned Jonathan against removing the INEC Chairman Professor Attairu Jega lest the nation’s  fledging democracy is truncated. He alleged that Jonathan “forced” the postponement on the Commission, thus designing an ideal situation for either a victory, or creating chaos and confusion in case of defeat.

Speaking on the struggle with Boko Haram, Obasanjo was not optimistic about the Nigerian military’s and allied forces’ success.

He, however, urged the leadership of both the ruling PDP and the opposition APC to ensure that the nation’s democracy remains intact.

Last weekend, the INEC announced its decision to heed the advice of Nigerian security agencies and postpone the elections, initially scheduled to take place in February, to late March and early April.