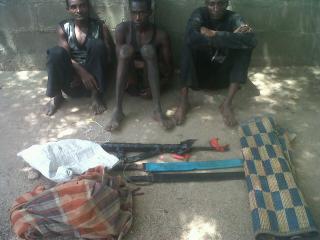 The State Police Public Relations Officer, Muyiwa Adejobi, who disclosed this on Sunday to journalists in Abeokuta, said some exhibits were recovered from the suspects.

According to him, the suspects subjected residents of Atoba Estate in Sabo area of Abeokuta, as well as commuters and other road users along Igboora and Ayetoro Roads to hell by their nefarious activities.

He said the suspects were arrested some days after a robbery operation at the estate when some of their victims, who were able to identify them while rearing their cattle around the area, made a report to the police.

He said, “The community leaders contacted the Divisional Police Officer in charge of the area, Gbenga Megbope, a Chief Superintendent of Police, who led a team of anti-robbery team to the scene, where the robbers were arrested.

“The arrested herdsmen led police to their hideout in a jungle called Igbo Olodumare along Igboora Road, Ogun State, where additional two Fulani herdsmen were arrested and guns with cartridges recovered from them”.

Adejobi said the acting Commissioner of Police in the state, Haliru Gwandu, had directed that the matter be immediately transferred to the Department of Criminal Investigation, Eleweran, Abeokuta, for thorough investigation.

“He also assured the good people of Ogun State of adequate protection of lives and property and that the command will not relent in its efforts to achieve effective policing of the state”, he added.