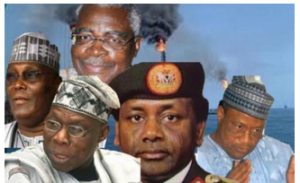 The richest oil blocks in Nigeria is owned by a few hundreds of persons while half of 160 million Nigerians live below S1 dollar daily. This injustice and wickedness must be corrected by whosoever wins the elections – whether Buhari, Jonathan, Interim Government, Boko Haram or civilian revolution. When I wrote the report titled ‘How Babangida, Abacha, Abdulsalami, Obasanjo Shared Nigeria’s Oil Blocks’ in April 2012, which was later rephrased as ‘20 Owners of Richest Oil Blocks in Nigeria ’ I had thought that the uproar and public condemnation that followed the report both nationally and internationally will precipitate an administrative investigation into the manner of the awards to sift the transparent deals which passed due diligence from those awarded after some bedroom performances. It is unfortunate that President Jonathan failed to revoke these illegal licenses to few criminals during his first tenure. Instead some more blocks and contracts were given another set of criminals under his watch. Had he taken such actions, the fear of defeat in the pols would have been non-existent because Nigerians from all tribes and faith enslaved by this bondage would have risen in his defense. It is not yet late for Jonathan, Buhari, Interim Government or even Boko Haram which soever succeeds in May 29th to revisit the disturbing sharing of Nigeria’s Oil Blocks to a few persons without recourse to transparency and put it back into the hands of the people. Those who proved they obtained theirs transparently should not be victimized under any circumstances.
Below again are the 30 Facts about the Fraudulent Sharing of Nigeria’s Oil Blocks and those involved

(1)The process of sharing Nigeria’s oil block national cake is as fraudulent now as when Ibrahim Babangida started the process of discretionary allocation of oil blocks to indigenous firms. Discretionary allocation of oil blocks entails that a president can reward a mistress who performs wonderfully with an oil block with capacity for cumulative yield of over $20 billion dollars without recourse to any process outside of manhood attachments. Babangida, Abacha, Abdulsalami and Obasanjo awarded discretionary oil blocks to friends, associates, family members, party chieftains, security chiefs and all categories of bootlickers, spokespersons and cult members without any laid down procedures.

(2)The recipients of such oil blocks will get funds from ever willing offshore financiers and partners to graciously settle the benefactors, the awarders, facilitators and the Commander-in-Chief through fronts. These settlements mostly paid into foreign accounts runs into hundreds of millions of dollars according to the potential yield of the block. Sometimes, the awarder (sharer of national cake and direct intermediaries) demand additional stakes in the bidding company. The awarder sends fronts as part of the directorship and management of the bidding firms without leaving a link to them. That is how the oil block national cake is distributed to a few Nigerians.

(3) Signature bonuses which are paid when an investor successfully bids, wins and signs agreement with the petroleum ministry, running into tens of millions and sometimes hundreds of millions of naira, is often waived off. There is actually no waiver; rather a diversion of what would have been paid to government coffers is paid into private purse as appreciation gifts. That is why those in the Petroleum Ministry dread retirement as though it signifies going to hell fire. No matter how little your influence, something substantial must enter your hands especially in hard currency. The nation loses billions of dollars in diverted revenue whenever any round of auction occurs.

(5) OPL 246 was awarded to SAPETRO, a company owned by General Theophilus Danjuma, by Sanni Abacha in 1998. Akpo condensate exports about 300,000 barrels of crude daily.

(6) OML 112 and OML 117 were awarded to AMNI International Petroleum Development Company owned by Colonel Sanni Bello in 1999. Sanni Bello is an in-law to Abdulsalami Abubakar, former Head of State of Nigeria.
(7) OML 115, OLDWOK Field and EBOK field was awarded to Alhaji Mohammed Indimi from Niger State. Indimi is an inlaw to former Military President Ibrahim Babangida.

(9) OML 108 is operated by Express Petroleum Company Limited is owned by Alhaji Aminu Dantata. Obasanjo , with the help of Andy Uba, awarded OPL 2008 to Tenoil Petroleum & Oil Services owned by Tony Elumelu and Jim Ovia
(10) OPL 2009 and 2010 were awarded to Global Energy Group owned by Chief Suleiman Onabiyi and Joseph Obiago . That is why a lot of major players in the oil industry owes Obasanjo and Andy Uba a lot.

(11) OML II3 allocated to Yinka Folawiyo Pet Ltd is owned by Alhaji W.I. folawiyo. Asuopku/Umuntu ( Egbema marginal oil fields) was awarded to Platform Petroleum in 2003 by Obasanjo.
(12) In 2010 Platform Petroleum (owned by Edmund Daukoru, a Bayelsa prince and Lulu Briggs among others) and Seplat ( owned by Prince Nasiru Ado Bayero, cousin to the Central Bank Governor Lamido Sanusi) teamed up in landmark partnership to manage the venture.

(14) OML 112 is estimated to have 130 million barrels of oil valued with the current price of $100 dollars per barrel at S13 billion dollars with 25 year lease.

(17) OPL 245 and it attracted the venom of Ota Majesty who revoked the licence. However, in 2006, Obasanjo had mercy on Dan Etete and gave him back his oil block worth over $20billion dollars.

(19) OPL 286 is managed by Focus Energy in partnership with BG Group, a British oil concern. Andy Uba has stakes in Focus Energy and his modus operandi is such that you can never see his name in any listings yet he controls OPL and OML through proxies.

(22) The oil block national cake sharing fiesta could take twists according to the mood of the Commander-in “Chief at the particular time. In 2006, Obasanjo revoked OPL 246 which Abacha gave to Danjuma because he refused to support the tenure elongation bid of the Ota Majesty.

(23) In 2000, Obasanjo had earlier revoked OPL 241 given to Dan Etete under the advice Atiku. However, when the Obasanjo-Atiku face off started, the Ota Majesty made a u-turn and handed back the oil block to Etete.

(24) During the time of Late President Yar’adua , a panel headed by Olusegun Ogunjana was set up to investigate the level of transparency in the award of oil blocks. The panel recommended that 25 oil blocks awarded by the Obasanjo be revoked because the manner they were obtained failed to meet the best practices in the industry. Sadiq Mahmood, permanent secretary in the Ministry of Petroleum endorsed the report to then president with all its recommendations. As a result of the report YarÃ¡dua revoked eleven oil blocks.

(25) In April 2011 Mike Adenuga attempted to buy Shell’s OML 30 for $1.2 billion dollars. The Minister for Petroleum and Nigeria’s most powerful woman refused the sale of the OML30 to Adenuga citing national interest. This block was sold to Heritage Oil for $800 million dollars eleven months later.

(26) This oil block business is so lucrative that Danjuma’s Sapetro divested of its investment in Akpo condensate for $1billion dollars.

(27) This business is second to none in Nigeria. That is why any attempt to investigate the activities in this sector will always be futile. The money is so much that they give bribes in millions of dollars. A birthday gift or child naming gift from an oil block owner to a government official could be as paltry as $2million dollars, and if the official’s father died, the condolence gift could reach mere $3 million dollars. When they want to bribe legislators, it is in millions of dollars and any ongoing investigation ends within weeks. They are so confident that with excess money they can buy up Nigeria and they are succeeding.

(28) In the name of competitive bidding, which Obasanjo introduced in 2005, officials bring companies overnight and through processes best described as secretive and voodooist, awards blocks to party faithful, fronts and phoney companies. They collect gratifications running into hundreds of millions of dollars which is paid into offshore account and the nation loses billions of dollars of revenue to private pockets.

(29) During the third term agenda, Obasanjo was deceived that the allocation of oil block to party faithfuls is to fund the third term agenda. With the failure of the third term, the beneficiaries went home with their fortunes and thanked God or Allah for buttering their bread. Senator Andy Uba coordinated the award of the last rounds of oil blocks by Obasanjo in 2005 and 2007. The then minister of petroleum, Edwin Daukoru was a mere errand boy who took instructions from the presidential aide.

(30) The regime of President Goodluck is not showing any signs of changing the status quo. Controversies have trailed the activities of the Minister of Petroleum, Diezani Madueke and many players in the Industry accuse her of demanding stakes from every oil deal. Diezani Madueke had also soiled herself in different oil deals and also awarded oil contracts to fictitious companies.
It is hoped that President Goodluck Jonathan will remember his transformational promise to Nigerians and endeavor to face the hawks in the oil industry. The angst in the air is so much that if this monster of illegal allocation of oil block is not addressed, the much touted revolution could begin all of a sudden and all who condoned this illegality at the expense of hungry Nigerians may have nowhere to hide.
With the rot in this oil block awarding system and other loot all over the Nigerian nation, something worse than revolution may happen. (This article was first published in April 2012)