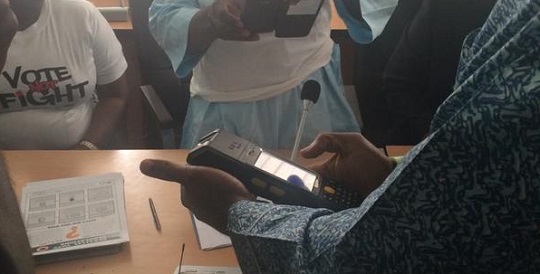 The Peoples Democratic Party (PDP), yesterday, rejected the use of computerised Card Reader Machines by the Independent National Electoral Commission (INEC), for accreditation and tracking of information on the Permanent Voter Cards (PVCs).

INEC had said that the machine could help in checking rigging as it would display information on any person who has voted. But the PDP has now registered its fears that the machine may not make for credible elections as it is said to easily malfunction especially when the battery gets weak.

The party also accused INEC of engaging in a lot of manipulations that could favour the opposition, but said it was only being diplomatic so as not to be seen as opposed to the polls.

National Chairman of the party, Alhaji Adamu Muazu made these observations in Abuja, when a delegation of Africa Union election observers led by AU Commissioner for Political Affairs, Dr. Aisha Abdullahi visited the national secretariat of the PDP.

Vanguard gathered that for each card reader to be effective, it needs to be charged for about 24 hours prior to the election even as it may not last for long hours before the battery would go down.

However, Muazu noted that although the use of card reading machine which forms part of INEC’s Electronic Management Tool, EMT was a welcome development in the nation’s political history, the failure of INEC to meet up with the role expected of it as it had not test-run the machines for Nigerians to see whether the process would be successful or not was a big failure by INEC.

He said Nigerians cannot be used as guinea pigs over the matter, hence INEC management must get their acts right before introducing the device.

Speaking to the AU election observers, Muazu urged them to ensure that they report the manipulations of the distribution of the PVCs by INEC to the whole world.

“What is happening today in INEC has been highlighted to them via letters from our party to Jega’s office on so many issues including the fraud of PVC that we anticipated.

“We all said this in writing to INEC. It is because we are the ruling party, we don’t want to be unruly. If we were the opposition, we would make a lot of noise and say a lot of things.

“In their own sense of judgment, how does Professor (Attahiru) Jega who is the leader of INEC exonerate himself from disenfranchising 23 million Nigerians and telling the world that he was ready for elections? We are saying that he was not ready. 23 out of the 68 million registered voters by his personal submission in the Council of State’s meeting that was held last week to review the preparedness or otherwise of INEC to conduct the election had not been distributed; 23 million PVCs were either produced and not distributed or not produced at all.

“This must be highlighted and made known to the world. Your report must be very explicit on what has happened. He is economical with the truth. We must not have 100 as the basis for distribution and collection; But 23 million out of 68 million eligible voters or 34% as the INEC Chairman himself confirmed (are not going to vote) is unacceptable by any standard,” he said.

Speaking earlier, the leader of the delegation of observers Dr. Abdullahi noted that they were impressed not seeing street fighting or protest trailing the postponement of the elections, adding that the development showed the level of maturity of Nigerians and the depth of democratic practice in the country.