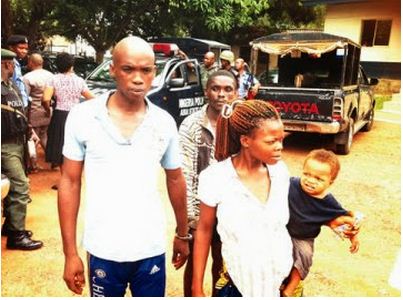 The police in Abia state have arrested George Maduabuchi pictured above for allegedly selling his 14 month old son for N300,000 to a herbalist. According to a report by Punch, George, a native of Owerrinta in the Isiala-Ngwa South Local Government Area of Abia State had connived with his accomplice, one Obinna Erondu who is now at large, to sell his own child

Narrating how her son was allegedly sold by her husband, Ebere, the pregnant wife of George said after her child had developed cough, her husband had asked to take him out to get some medicine only for him not to return with the boy. When she asked the man where their son was, he couldn’t give her a good explanation. She said she quickly raised an alarm which attracted their neighbors who called the police

“When I demanded explanations on the whereabouts of our son, he could not offer any convincing answer.” she said

Confirming her statement, the State Commissioner of Police, Mr. Joshak Habila said; “Luck ran out on Maduabuchi when the wife alerted the police on his questionable role when the baby fell ill and he took him out and did not return with him.”.

When interrogated, the suspect denied selling his son but says he took him to a herbalist who offered to cure him and also gave him some money

“The herbalist gave me money and told me that he could not heal the baby. I therefore left the baby in the herbalist’s home.”he said

The police is still investigating the matter