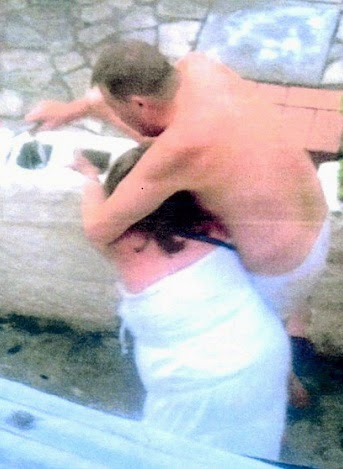 This is the moment a terrified woman desperately fought for her life as her crazed husband held a knife against her throat. Neighbours watched in horror as drunk Glenn Mills grabbed his wife Susan around the neck and threatened to kill her.

The terrified mother feared she was going to die at the hands of her jealous husband as he pointed the large kitchen knife towards her throat and told her: ‘If I’m going down I’m going down for something worthwhile.’

‘Bullying’ Mills had already beaten his wife a month earlier and been banned from their flat in Margate, Kent. But the 48 year old alcoholic returned in July after drinking and Susan complained, telling him: ‘Glenn you can’t treat me like this.’ 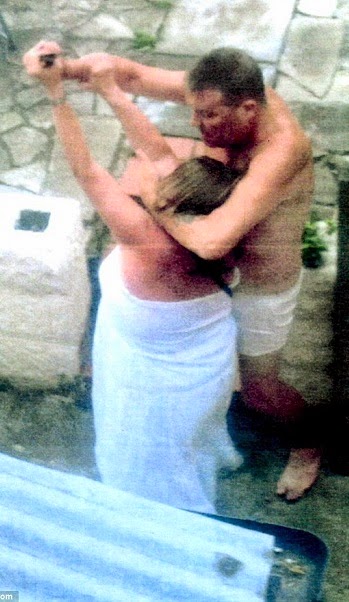 Mills told her ‘Call the police!’ and she ran into their garden and shouted to a neighbour to make the 999 call.

Prosecutor Dominic Connolly said she then saw Mills emerge carrying a large kitchen knife. He grabbed her around the neck.

Mr. Connolly said: ‘He then put the knife to her throat and then her stomach as she pleaded: ‘Please don’t kill…please someone help!’

‘She said that she thought she was going to die but managed to get the knife off him and threw it over a fence.

‘She then ran into her daughter’s bedroom and carried her to a neighbour’s house and called the police.’

Mr Connolly said the attack was seen by a neighbour who saw Susan being held in a headlock and her husband making stabbing movements towards her face and neck.

They said Susan ‘looked absolutely terrified’ and took the photos on their mobile phone before calling for help.

Susan escaped to the neighbour’s flat for safety but Mills followed her begging his wife not to press charges.

Police arrived within minutes and found Mills sitting on the toilet and ‘extremely drunk’.

The court heard how Mills had a previous conviction in October 2012 for battery on his wife when he fractured her fingers, telling her later: ‘I wish that I had killed you.’

Canterbury Crown also Court heard that the couple had argued over the parentage of their child. He was originally charged with attempted murder but on the day of his trial pleaded guilty to assault by beating, affray and making threats to kill.

He was jailed for three years and eight months. 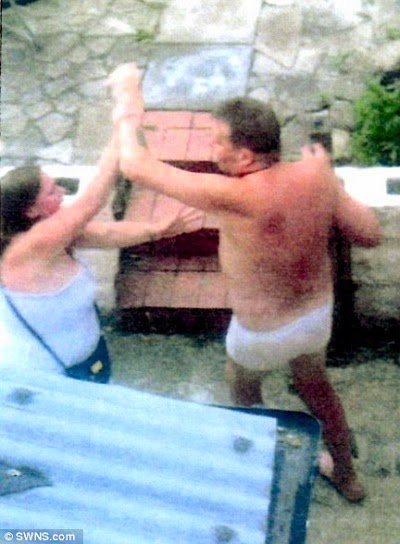