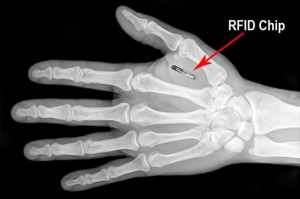 A Swedish office block is taking its security to a new level by implanting computer chips under employees’ SKIN rather than issuing them ID cards. Read more from ScoopNest:

Instead of swiping ID cards to gain access to the building, workers will move their hands across scanners which detect a chip injected into the hand. About the size of a grain of rice, the RFID (radio-frequency identification) chip also provides access to photocopiers and could soon be used for paying for the bus or buying a sandwich.

The chips have been offered to the 400 people at the Epicenter hi-tech office block in Sweden with some more enthusiastic than others about the technology. The process is being organised by a Swedish bio-hacking group who believe the idea will take off worldwide since the first ‘implant party’ was held in November.

Speaking to the BBC, Hannes Sjoblad said: “I am convinced that this technology is here to stay and we will think it nothing strange to have an implant in their hand.” On the day of the opening of the office block, the developer’s chief executive was chipped live on stage, but there are reports that with the technology still in its infancy it may yet need some tweaking.