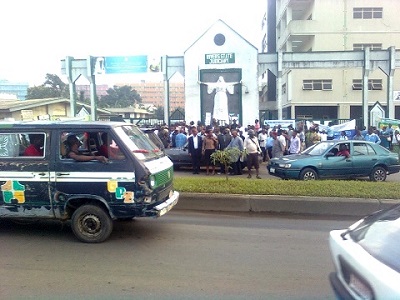 The Rivers State Police Command on Monday confirmed the coordinated attack on the premises of the state High Courts in Isiokpo, Port Harcourt and Degema.

The Rivers police spokesperson, DSP Ahmad Muhammed, who confirmed the incident in a statement issued in Port Harcourt yesterday, said an improvised explosive device suspected to be dynamite, was used by the arsonists in the coordinated attacks which affected part of the courts’ buildings as well as important legal documents.

“The Rivers State Police Command wishes to confirm that in the early hours of Monday 02/02/2015 coordinated attacks were launched on judiciary court premises at Degema, Isiokpo and Port Harcourt with explosive devices suspected to be dynamite by unidentified and unpatriotic assailants.

“No live was lost. Areas are now under Police control while Police Bomb Disposal Unit has commenced discreet investigation in earnest”, the statement said.

Muhammed said the Command has put in place efforts that will lead to the arrest of the masterminds of the attacks and solicited the cooperation of members of the public to assist the police in the area of volunteering information.