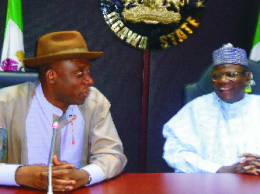 Ahead of the general elections in the country this month of February, a group, Niger Delta Non-Violence Youth Leaders Assembly, has warned Governor Sule Lamido of Jigawa State to be wary of the antics of his Rivers State counterpart, Chibuike Rotimi Amaechi.

It expressed happiness that Lamido had refused to fall prey to Amaechi’s antics, but had remained focused in championing Jonathan’s candidature.

The group was reacting to the closed-door meeting between both governors, who are on different sides of the political divide, in Dutse, at the weekend.

President of the group, Ambassador Kennedy West, in a statement on Monday commended the Jigawa State governor for his immense contribution towards the growth and stability of the ruling Peoples Democratic Party by raising standards and inculcating good morals.

He said, “We pour out our appreciation to you, Governor of Jigawa State and President Goodluck Jonathan’s North-West campaign coordinator, Sule Lamido for your immense contributions towards the growth and stability of the PDP.

“Lamido’s maturity was demonstrated in the way and manner he carried himself during the arguments in the ruling party that saw the defection of the five governors to the All Progressive Congress.

“His patience was appreciated when he remained resolute in the party in spite of misgivings and had encouraged the party to grow and wax stronger.

“Lamido is one person we revered because of the qualities he exudes. That same outstanding character played out in his speech as he admonished the defectors of playing politics of desperation.

“We are all very optimistic that as a doyen in Nigerian politics whose legacy traverses generations, he would not fall prey to Amaechi’s antics. As youths from the region and state where Amaechi emerges from, we have a better understanding of Amaechi’s hostile and desperate quest for power even to the detriment of his trusted allies”.