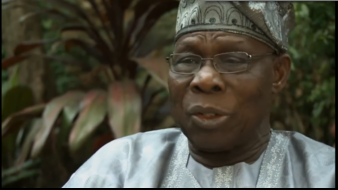 Nigeria’s former president, Chief Olusegun Obasanjo, has refused to be drawn in to the debate in the country on what happens if there is no election by May 29, 2015 when President Goodluck Jonathan’s tenure would have come to an end.

The former president, who is currently in Nairobi, Kenya, to launch his controversial new book, My Watch, which is banned in Nigeria, spoke to the BBC.

Obasanjo, who last week promised to maintain sealed lips on political happenings in the country until after the February 14 presidential elections, which has been postponed by the Independent National Electoral Commission, INEC, said he would not go by speculation that there are sinister plans to form an interim government, choosing instead to rely on what the constitution says.

The former president, who reiterated his stance to adopt a wait, watch and see attitude, assured that despite concerns expressed in some quarters about the future of Nigeria, the country will survive.

“Nigeria has gone near the precipice on many occasions before and we’ve gone back. We’ll continue to have this type of uncertainty… we’ve had more than half a dozen of them in the past and we have survived them”, he said.