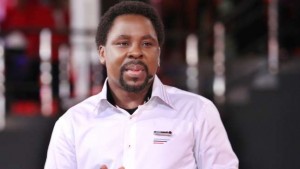 In a newly published article, the man of God was called “one of the most influential personalities in Africa”, beginning his journey from a poverty-stricken background to the head of an internationally acclaimed Christian ministry

The popular televangelist was listed by the ‘Society For The Recognition Of Famous People’ on their  websitefamouspeople.com which collates and archives the lives of very influential people over the years.

Almost 6000 famous individuals have so far been documented by the website, pooled from an impressive array of business people, scientists, writers, musicians, sports persons, painters, physicians, singers, dancers, film and theater personalities, activists, intellectuals, academics, fashion icons, only four other Nigerians have so far been noted by the society, these being Nnamdi Azikwe, Chinua Achebe, Wole Soyinka and President Goodluck Jonathan.

The prophet was included in the media personalities, leaders, lawyers, engineers and inventors.

Joshua was included in the section of ‘spiritual and religious leaders’ with the likes of the Dalai Lama, Pope Francis,Martin Luther King Jr and Mother Teresa.