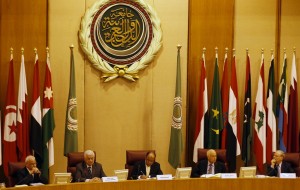 The ambassador of Qatar to Egypt has been recalled, in a dispute over Egyptian air strikes on Islamic State targets in Libya, the state news agency QNA said late on Wednesday. Reuters report:

The diplomatic row came just two months after a thaw began in relations between the two. Egyptian jets bombed sites in Libya on Monday hours after Islamic State militants there released a video showing the beheading of 21 Egyptian Christians, drawing Cairo directly into the conflict across its border.

Qatar expressed reservations over the attack at a subsequent meeting of the Arab League, angering Cairo. Saad bin Ali al-Muhannadi, a Qatari foreign ministry official, cited misgivings on “unilateral military action in another member (state) in a way that could harm innocent civilians”.

Despite Qatar’s concerns, the Arab League put out a statement on Wednesday expressing its “complete understanding” over Egypt’s air strikes and threw its weight behind Cairo’s call for a lifting of the arms embargo on the Libyan army.Qatar also expressed reservations on this point. Al-Muhannadi said it would give leverage to one party over the other before peace talks were concluded and a coalition government was formed.