Yesterday, news filtered in that President Goodluck Jonathan has sacked his social media strategist, Reno Omokri, due to some blunders that showed that the president’s chances of winning the 2015 election are slim. 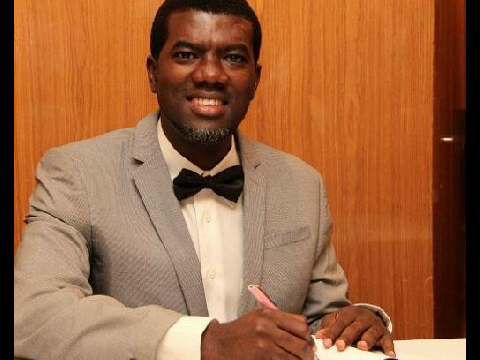 The news which went round like wildfire got a lot of the social media strategist and Special Assistant to President Jonathan on New Media mocked by lots of his followers. While some said he has been used and dumped, some were of the opinion that the presidency was right to have taken such great step in kicking out Reno and it would even be of greater benefit for him if he sacks some other ones corrupt ones still in the system.

However, Reno took to his Twitter page few hours ago to reply those rejoicing about his sack from Goodluck Jonathan’s cabinet. He replied in just two tweets with the words of God and here’s what he said: 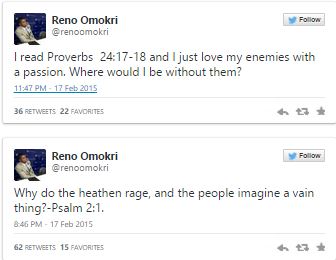 From the look of things, he was n0t sacked, Obi Asika is just meant to be his new boss when it comes to president Jonathan’s campaign online.

It would be recalled that not long ago, Reno Omokri, alongside armed thugs who were said to be working according to his instructions burgled a house in Bendel Estate, Warri. This is not the first time the social media guru will be using Bible quotes, he once replied Professor Osinbajo of the All Progressives Congress with some bible verses over national issues.

Just recently, the special adviser to President Jonathan on new media, Reno Omokri also made an attempt to credit President Goodluck Jonathan via a Twitter poll but unfortunately, it favoured Rtd. Gen. Buhari.