The Independent National Electoral Commission (INEC) has said it is yet to take a decision to shift the general elections or hold them as scheduled Premium Times reports. 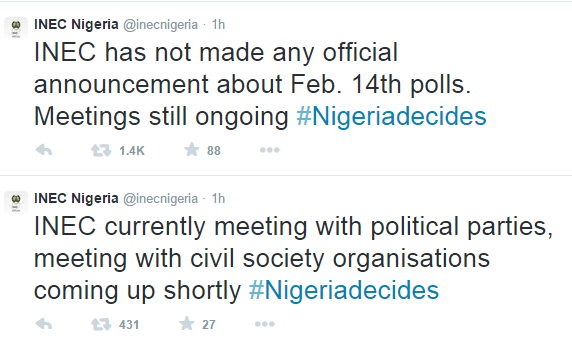 The spokesperson to the INEC Chairman,Kayode Idowu, disclosed this to PREMIUM TIMES a short while ago.

The presidential and national assembly elections has been fixed for February 14 while those of the governorship and state houses of assembly are scheduled for February 28.

The Nigerian government and the ruling Peoples Democratic Party have been pushing for the postponement of the polls citing the security challenge in the northeast zone of the country as well as INEC’s poor handling of the distribution of the Permanent Voters Cards as reasons.

Although the electoral body has insisted it was ready for the elections, the Council of State rose from its meeting on Thursday asking it to go ahead, while also advising it to consult widely on the matter.

This prompted INEC to commence a fresh round of consultation at the end of which it would address a press conference later today (Saturday) to announce the its decision on the matter.

Idowu told Premium Times via a text message no decision had been reached on postponement contrary to a report by an international news agency (The Associated Press).

When Premium Times contacted Idowu, he spoke in low tone, saying his Commission was in a consultative meeting with the leadership of the 28 political parties.

At the time of this report, members of the Civil Society Organisations, CSOs, were about to take their turn after which the Commission would meet with the 36 state Resident Electoral Commissioners and that of the Federal Capital Territory.

Asked to confirm if the elections had been postponed as reported by some media organisation, Idowu said, “Nothing like that (has been) decided by INEC yet.”

INEC is expected to make an official announcement of the postponement at a news conference later in the day.

It would be recalled that, the Independent National Electoral Commission (INEC) has stated that it would hold a meeting with chairmen and secretaries of all registered political parties, and Resident Electoral Commissioners, (REC) today, to decide whether to shift the general elections scheduled for February 14 and 28.