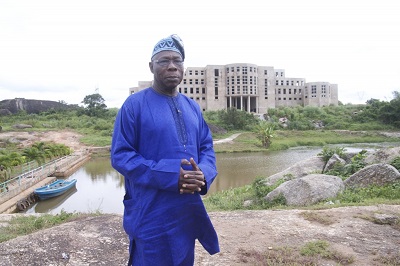 The Federal Ministry of Agriculture and Rural Development has dismissed a media report claiming that the Obasanjo Farms has been attacked by bird flu.

A newspaper had reported that residents living around the farm had raised alarm on the outbreak of the bird flu, expressing fears that their lives were in danger since no effort was made to quarantine the area and cull infected birds.

But the ministry in its response, described the write-up as “a false alarm, a misleading assertion and an attempt to exaggerate the bird flu outbreaks within the nation beyond proportion so as to set off undue panic”.

The ministry claimed that following the report, the Minister of Agriculture, Dr. Akinwumi Adesina, dispatched the Federal Director of Veterinary Services and his workers to ascertain the facts on the ground.

The statement also claimed the minister contacted the Commissioner of Agriculture in Ogun State, Ronke Sokefun, to get the state ministry to verify the authenticity of the said publication.

“Based on thorough investigation of the published outbreak, which did not emanate from any of the official channels of bird flu reporting, it has been found that no such outbreak occurred.

“The Federal Ministry of Agriculture, therefore, hereby appeals to the general public to disregard the reported bird flu case(s) on Obasanjo Farms”, the ministry stated.