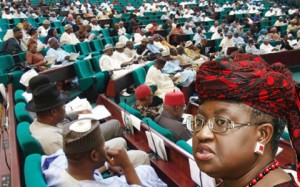 The House of Representatives, yesterday, issued a one week ultimatum to the Minister of Finance and Coordinating Minister of the economy Ngozi Okonjo-Iweala to submit the report of the forensic audit on the alleged missing $20 billion.

This came following a resolution passed last week by the House at plenary which directed its Committee on Public Accounts, to investigate the matter.

Speaking to journalists on the matter, Chairman of the committee, Hon. Solomon Adeola Olamilekan (APC, Lagos) stated that the report “must include the Initial Draft Report, the Executive Summary and Management/Internal Control Letters.”

He noted that the “condensed version” of the report released to the public through a press conference addressed by the Auditor-General of the Federation with the highlight that Nigeria National Petroleum Corporation (NNPC) should remit a minimum of $1.48 billion to the Federation Account had rather prompted the demand for complete report.

“Given the weighty allegation of possible loss of $20 billion to the Federation Account arising from alleged non-remittance by NNPC through the ministry of finance, it is curious that the forensic audit was commissioned and appointment of auditors was made by the minister of finance, an indictable official, if allegation is proven, without the involvement or at least input of the Auditor-General, whose office is eminently and exclusively empowered for the duty by the 1999 Constitution.”

“The report has been unduly delayed and its submission also side-stepped the Auditor-General. It is a professional best practice that such reports first come in draft, discussed, fine-tuned before the release of the final report, usually accompanied by the more detailed Management Letter,” Olamilekan said.