A group of women from the Rido community in Kaduna State, took to the streets on Wednesday, February 19, 2015 to publicly complain about their husband’s sexual weakness, asking that they start performing their matrimonial duties or face mass divorce. 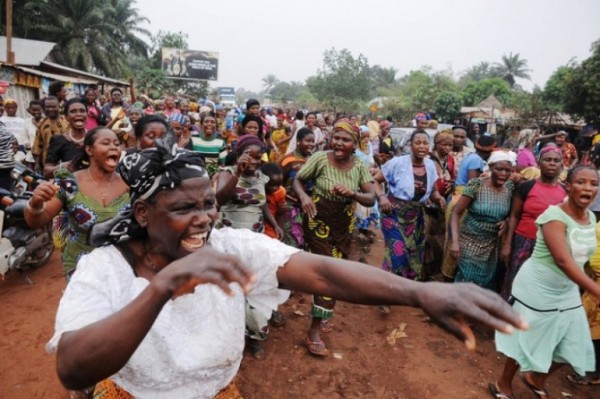 The women, who were assembled at the NDA Junction in the state capital, blamed the Kaduna Refining and Petrochemical Company (KRPC) for their husband’s inability to perform as a result of the chemical waste and fumes from the company into their environment.

Speaking to newsmen during the protest, some of the married women complained bitterly that some of the men in the Mararaba Rido community were impotent due to the toxic waste from the KRPC.

They revealed that their husbands suffer weak erection and infertility, while the women suffer miscarriage and other health complications.

A married woman, Jummai Isaac, 27, said she has not taken in since she got married in the year 2000.

“I haven’t conceived since I got married in the last fourteen years, and doctors have, on several occasions, confirmed to me absence of any known cause of inability to get pregnant.

Initially, doctors thought I had fibroid in my womb, but after several scans and some medical tests, they dispelled that notion.”

However, a community leader, Mohammed Bashar, explained that, “Most of the complaints could be associated with secondary infertility, because victims have, in the past, given birth to children before they suddenly stopped.

There was widespread belief that smoke and poisonous gases emitted from the refinery have reproductive health effect on people living in the area, but no medical report has confirmed the allegation due to inability of villagers to seek comprehensive medical tests, perhaps owing to lack of awareness and poverty.”