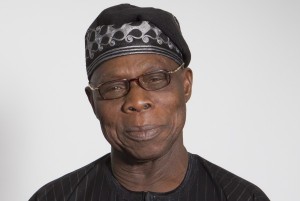 This is really hilarious, I guess this clears the air on who he’s supporting to win the presidential election in a few weeks time.

The Godfather himself, Obasanjo officially dumped the PDP during a press conference and symbolized the move with the tearing of the card.

The former President however didn’t tear the card himself but instead apparently instructed an associate to rip it into the shreds.