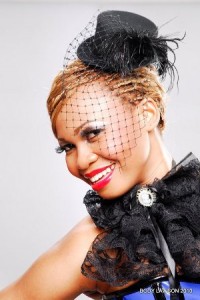 It’s been a sad two years since the Nigerian music industry witnessed the death of Goldie Harvey on February 14, 2013.

Reports say that journalists visited Goldie’s tombstone as a prelude to the second anniversary of her death, the register at the cemetery shows Denrele Edun has been the only close friend/celebrity that has visited the late singer’s resting place.

For Denrele, who was both very prominent and vocal during Goldie’s burial, continuing to pay respects to his late friend is the fitting way, hence his visit to Goldie’s graveside on Friday, February 13, 2015, signing in at 12:52pm and signing out at 1:30pm….

At the time of her death, perhaps no one was as close to Goldie as eccentric Channel O VJ. Denrele Edun and given the circumstances surrounding her death, it’s safe to say Goldie died in his arms at about 10pm on February 14, 2013.

Goldie, an act signed to Kennis Music until her death, was buried two weeks after, precisely on February 25, 2013 at the Vaults and Gardens in Ikoyi, Lagos.

Her best friend and confidant, media personality, Denrele Edun who was with her at the hospital where she died, has just shared heart touching tributes to her.