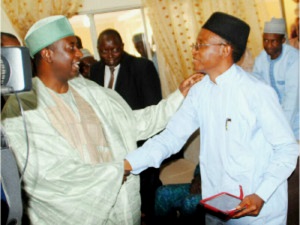 Nigerian Army authorities in Kaduna State on Thursday said they discovered arms meant to cause mayhem at the venue of President Goodluck Jonathan’s re-election rally in the state over a week ago.

The Army also said children below voting age gained entry into the Ahmadu Bello Stadium, venue of the rally, and booed party leaders.

Representative of the Army Commander, 1 Division Internal Security Force, Brigadier-General John Malu, said this at a meeting with governorship candidates in Kaduna.

According to Malu, no political party can claim to be innocent of violence in Kaduna State.

He said the Army seized arms from party loyalists during the recent PDP presidential rally while a number of vehicles were damaged during the APC’s rally in the state.

“During the APC presidential rally, many vehicles were damaged because they were not carrying the posters of some candidates. Again, I personally screened people entering venue of the recent PDP presidential rally and I discovered arms concealed under the clothes of people and seized a lot of them”.

The Army officer added that during the forthcoming elections, soldiers will not be stationed at polling units but at “strategic locations”.