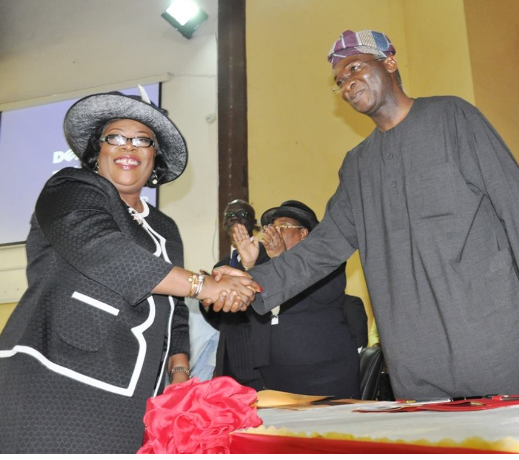 Chief Judge of Lagos State, Justice Olufunmilayo Atilade, has pleaded with the Lagos State Governor, Babatunde Fashola (SAN), to pay the January salary of the judiciary workers in the state.

The governor had reportedly refused to pay the workers, who had downed tools in January to protest against the non-compliance with a judgment for financial autonomy for the judiciary.

The industrial action, which the workers embarked upon for over three weeks, was ordered by the National Executive Committee of the Judiciary Staff Union of Nigeria, the umbrella body of all judiciary workers in the country.

It was gathered that Fashola had hinted that the workers did not deserve pay for the month of January, since they had stayed away from their duty posts for most part of the month.

But Atilade, on Tuesday, pleaded with the governor to release the workers’ salary, reminding him that the workers had demonstrated maturity and understanding by calling off the strike, which was still in force in many other states.

The Chief Judge also urged Mr. Fashola to give effect to the autonomy of the judiciary as provided for in the Constitution.

Atilade made the appeal on Tuesday at the inauguration and handing over of new courtrooms for judges and magistrates in Ikeja by Fashola.

She said, “We use this medium to appeal to His Excellency, Governor Babatunde Fashola, SAN, to give the Lagos State judiciary its financial autonomy as provided for in the 1999 Constitution of the Federal Republic of Nigeria.

“We also make a very passionate appeal to His Excellency to release the January salary of judiciary staff, who went on a nationwide strike with their colleagues.

“Your Excellency, the workers saw the need to call off the ongoing nationwide JUSUN’s strike. Other states are still on strike but they are being paid. Your Excellency, January was a though month for everybody”.