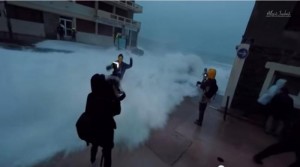 A French news reporter who was on air during a live broadcast got knocked off her feet by a huge wave, laughed off the mishap and continued her report.

Fanny Agostini was delivering a live report on the weather in Saint-Malo on Friday morning for news channel BFMTV when a large wave crashed behind her and sent a strong stream of water to knock the reporter off her feet.

The scene was recorded by the BMFTV camera crew as well as photographer Alexis Saubois, who was filming nearby.