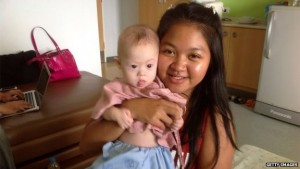 Thailand has passed a  bill into law banning foreigners from paying Thai women so as to be surrogates, after two high-profile cases sparked debate last year. BBC reports:

The legislation also bans the use of agents, or any promotion of women willing to carry babies for others. Last year the case of a little boy born with Down’s syndrome put Thailand’s surrogacy industry in the spotlight. His Thai surrogate mother said his Australian parents abandoned him, but took his healthy twin sister home.

Concern about the industry increased when a Japanese man was found to have fathered more than a dozen babies by different Thai surrogates. Commercial surrogacy was supposedly banned by Thailand’s Medical Council in 1997.

Nevertheless a booming surrogacy industry has sprung up, attracting many foreigners. Lawmaker Wanlop Tangkananurak said the law – which was first read in parliament in November – aimed to prevent Thailand from being “the womb of the world”.

It sets out a maximum jail sentence of 10 years for anyone hiring a commercial surrogate.