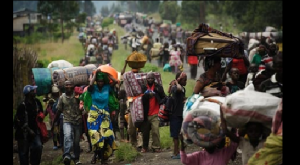 Thousands of civilians have fled their homes in the town of Diffa, southeastern Niger this week, following waves of cross-border raids as well as suicide bombings by Nigerian militant group Boko Haram, officials said on Thursday. Reuters report:

Attacks in Niger are deepening a humanitarian crisis in the remote border zone. The area, struggling to feed some 150,000 people who have run to escape violence in northern Nigeria, has seen around 7,000 arrive this week in Zinder, Niger’s second biggest town some 450 km (280 miles) west of Diffa.

The International Rescue Committee, which supplied the population estimates, has teams working on the ground there. Matias Meier, country director, said some families in Zinder, one of the poorest regions in Niger, were having to host 20 people, while other displaced were sleeping in the stadium.

Still more continue to make the journey from Diffa, he added.

“Those who went on the trucks are the lucky ones. Bus tickets are sold out until the end of next week. Many are just walking or going by bicycle,” Meier told Reuters.