Three Muslim Students Gunned Down By Atheist In North Carolina 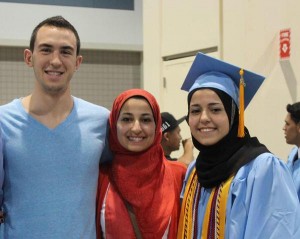 A shocking and sudden spasm of violence near campus of the University of North Carolina was followed quickly by alarm and debate about why three Muslims were allegedly gunned down by their neighbor and what role, if any, religion may have played in the shootings. The WashingtonPost reports:

Police on Wednesday said that initial indications suggested the shooting stemmed from “an ongoing neighbor dispute over parking,” an assertion that was echoed by the suspected shooter’s wife. But relatives of the victims insisted that the incident should be viewed as a hate crime, while the fact that three Muslims were killed in a single shooting drew international attention to a relatively quiet college town.

The three victims were identified by police and school officials in the early hours of Wednesday morning. They were all young adults with ties to universities in the region, two of whom had gotten married just six weeks earlier: Deah Barakat, 23, was a second-year student at the University of North Carolina’s School of Dentistry; his wife, Yusor Mohammad Abu-Salha, 21, was set to enroll there in the fall. The third victim was her 19-year-old sister, Razan, a student at nearby North Carolina State University in Raleigh.

Also early Wednesday morning, police said they had arrested and charged Craig Stephen Hicks, 46, with three counts of murder. Hicks turned himself in to the Chatham County Sheriff’s Office in nearby Pittsboro after the shooting.