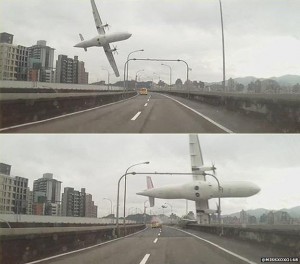 Black box data from the TransAsia Airlines turbo-prop plane that crashed in Taiwan has showed that power was cut to both engines, investigators say. BBC reports:

Taiwan’s Aviation Safety Council said the engines failed to produce enough thrust for two minutes after take-off. Data suggest that the flight crew tried to stop and restart one of the engines, without success. Flight GE235 carried 58 passengers and crew, at least 35 of whom died when the plane crashed into a river. Fifteen people survived the crash.

According to investigators at a briefing in Taipei, the plane ran into trouble just 37 seconds after taking off from Taipei’s Songshan airport. Thomas Wang, director of the Aviation Safety Council, said the pilot announced a “flame-out”, which can occur when the fuel supply to the engine is interrupted or when there is faulty combustion.

However, Mr Wang said there was in fact no flame-out, and the right-hand engine had actually shifted into idle mode without the oil pressure having changed.

“The plane flashed a flame-out signal for one of the two engines at 10:53:28 when the plane climbed to an altitude of 1,200ft, triggering a warning,” AFP news agency quoted Mr Wang as saying.