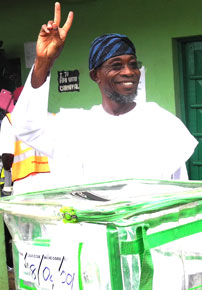 The election of Mr. Rauf Aregbesola as the Governor of Osun State has been upheld by the Election Petition Tribunal sitting in Osogbo, the Osun capital.

The petition filed by the candidate of the Peoples Democratic Party, Senator Iyiola Omisore, challenging the result of the August 9, 2014 governorship election in the state, was dismissed by the Justice Elizabeth Ikpejime-led tribunal on Friday, Nigerian Politics Online is reporting.

It would be recalled that Mr. Omisore had on August 29 approached the Election Petitions Tribunal to challenge the verdict of the Independent National Electoral Commission, INEC, which declared the All Progressives Congress (APC) candidate and incumbent Governor Aregbesola winner of the elections.

His petition, which was in three volumes, alleged that the election was rigged in favour of Mr. Aregbesola, and that some members of the O-YES (Osun Youth Empowerment Scheme) were used as INEC ad hoc staff, while some security agents were compromised.

However, in its ruling, according to Nigeria Politics Online, whose reporter was in court to cover proceedings, the tribunal held that the witnesses called by the petitioner did not provide compelling evidence to support the petitioner’s claim of corrupt practices during the election.

It (tribunal) further held that there was nothing to show that the election was conducted without substantial compliance with the provisions of the Electoral Act.

“The testimonies of these witnesses are unsatisfactory and PDP forensic analyst did not show that ballot papers were not used accordingly”, the Chairman of the tribunal, Justice Ikpejime‎ said.

“As such, their testimonies failed to support their claims. None of them gave evidence on the issue of multiple voting, which they earlier claimed. The panel also held that issue of multiple voting was not found in his examination. On allegations of over-voting, no single evidence of over voting was proved. Similarly, on the allegations that O-Yes was used as INEC officials, there is no such evidence”.

The panel also held that the inability of the petitioner to prove his allegation that security operatives were compromised during the election further damaged the substance of the petition.