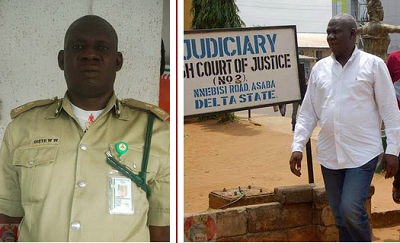 A former Deputy Comptroller in charge of Ogwashi-Uku Prison in Delta State, DCP Diete Wure Wisdom and a Senior Inspector of Prison, Ayamede Peter, have each been sentenced to three years imprisonment for stealing 27, 200 litres of automotive gas oil (AGO) stored in exhibit trucks, left in the custody of the prison service.

They were sentenced to prison by Justice C. O Ogisi of Delta State High Court, Sapele, on Wednesday.

The duo were prosecuted on a 4-count charge by the Economic and Financial Crimes Commission, EFCC, on the strength of evidence that they conspired to sell products in three exhibits trucks: Mack tanker with registration number XD 605 JJT and Man Diesel Lorries with registration numbers, XD 789 ENU and XD 620 FGG, filled with AGO.

The petitioner had alleged that after the sale of the products, the drums and the tankers were refilled with water on the directives of DCP Wisdom.

Consequently, they were arraigned on November 1, 2013, on the four count charges but they pleaded not guilty to all the charges.

One of the counts read, “That you Wisdom Wure Diete and Peter Ayamede while being a Deputy Comptroller of Prisons in charge of Ogwashi-Uku prison and a Senior Inspector of Prison respectively on or about April 2012 at Ogwashi-Uku Judicial Division did steal 27,200 litres of Automotive Gas Oil (AGO) being the content of the 134 (One Hundred and Thirty Four) drums of 200 litres each loaded in a truck with registration number: XN 789 ENU, valued at about N4, 02,000.00 property of the Federal Republic of Nigeria kept for safe keeping with the Nigerian Prison Service Ogwashi-Uku which you were in charge and thereby committed an offence contrary to section 390 and punishable under Section 390 (5)(8)(b) & (9) of the Criminal Code Law CAP C21 Laws of Delta State of Nigeria 2006”.