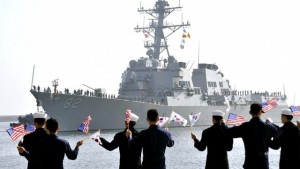 North Korea regularly protests the annual exercises, which it says are a rehearsal for war, and has recently stepped up its own air, sea and ground military exercises, amid a period of increased tensions between the rival Koreas.

“The whole course of Key Resolve and Foal Eagle is aimed to occupy the DPRK through preemptive strikes,” said an editorial in the ruling Workers’ Party newspaper, the Rodong Sinmun, referring to the names for the exercises.

DPRK is short for Democratic People’s Republic of Korea, the North’s official title.